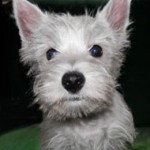 Ellie came to Westie Rescue at 13 weeks of age because her bladder wasn’t properly connected and her owner wasn’t able to afford the testing and probable surgery that would be required.  We agreed to take Ellie on, knowing that the odds of a complete repair were not high for this birth defect, but decided to take a chance on letting this little girl have a healthy, happy life.

Ellie was treated at Advanced Veterinary Care in Canton, Michigan.  (Thank you AVC, for the very nice Rescue discount and her good care.)   The doctor wanted her initial test results reviewed by an expert for consultation because the results were not clear.  Her surgery was delayed and she entered foster care.  She was a normal, active puppy, except for dribbling down her legs.  Her urine was going to her vagina rather than through her bladder and that caused staining of her rear and legs because of the constant exposure to urine.  She is now wearing a tinkle tog doggie diaper made especially for her, which helps with the dribbling urine. 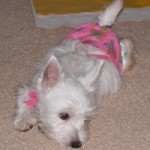 She also needed an antibiotic because, like most dogs with this problem, she had a urinary tract infection.  She spent a couple of days in the company of two older Westies and did very well with them.   In the meantime, the expert reviewed her information and agreed that she did have an ectopic ureter and there were no other obvious defects.  She went back to the hospital, had the bladder surgery and was spayed.  After a night in the hospital, she went to her long-term foster home.  There she met her new foster brother, Charlie, and began her new life.

had returned to normal size – a good sign, but they were concerned that she had not stopped dribbling.  There is still a chance that she has another defect that is not visible.  This kind of surgery can take 2 to 3 months to resolve.  If the problem has not been fixed, then we will consider starting medication support or other procedures.  In the meantime, she’s being a typical puppy.

As a typical puppy, and a Westie puppy at that, Ellie has tried since the beginning to remove the diaper and the “cone of shame” that is keeping her from paying attention to her surgical area.  Recently she was put into a soft collar which she seems to be handling much better.  She’s playing with her foster brother, Charlie, and they seem to get along quite well.  Soon she will get her stitches out and, of course, we’re watching for improvements in the original condition.  She’s having a good time right now, enjoying life as only a puppy can. 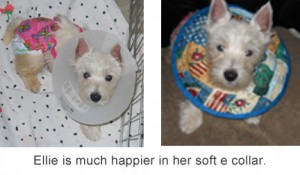 Today I received the best Christmas gift.  When I picked Ellie up this morning, after she had been (at the vet’s) for two hours, they said she had not dribbled once.  She was completely dry and she was holding her pee until they would let her squat!  They did find that she had elevated white cells in her urine so she will remain on the antibiotic for another 14 days.  Then they will recheck.  Her sutures are out now and the incision site looks great.

She does squat in the house quite a bit.  I’m not sure if anything comes out because she has had a diaper on.  I will have to work with Deb to figure out how to best correct this.  I don’t want to frighten her by rushing her outside every time she does this.

She was the center of attention yesterday at my sister’s and parent’s houses.  She was a little angel.  She did great with her first “kid”.  My niece (age 7) was playing with her and she was having a ball.  Ellie would jump up every now and then and just catch the tip of her nose with a kiss.  It was very sweet.  She also did not squat at either house.  I know my niece would have ratted her out if she saw her squatting.  So it seems when she is distracted, she is not squatting.

I am so happy that Westie Rescue took the chance on this little girl.  We have given her a life full of so many opportunities.  She is a very special dog and this is all I have been hoping and praying for.

She is doing great and we are working on her “potty outside” and working with Deb.  Ellie is recovering from an infection, so we are taking it slowly.  We have bells at both doors and are ringing them each time we go out.  She did jump and hit the ones at the front door today, but I don’t think it was to magically open the door with bells (yet).  (New photos in album below).

Today was a great day in our house.  Ellie had not been out there for two hours, and when I took her diaper off, it was completely dry!  Hooray!  That was a first.  Charlie has passed the two-week mark with the foster dog, so it’s okay to be nice to her now.   Charlie and Ellie are playing with each other all the time now.

We brought Ellie with us to my sister’s for New Year’s Eve.  They have a Bernese Mountain dog and a
cat.  Ellie loved the 110 pound dog, but was afraid of the 15 pound cat!    She will be good with cats …. eventually they were okay with each other. 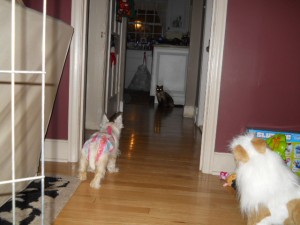 Ellie is doing great!!  Foster mom reports she is no longer dripping.  Right now, Foster mom is working on her housetraining.  Soon she will go to the vet and get caught up on the normal medical for her age and if things keep on track, it may not be too long before she will be looking for a home.

Ellie is doing great.  She saw Dr. Tallis on Monday and received a clean bill of health!  She is in terrific shape and now weighs 8.4 pounds.  The bacteria in her urine was very minimal.  She received her last vaccines, was microchipped.

She is slowly learning not to potty in the house.  She still squats frequently and I do my best to calmly take her outside.  She does know “potty outside” and looks up to me while doing her business outside.  She will go on command every time I take her outside.  She knows that a treat is coming.  I have to quickly pick up her pooh.  She is going through an eat the pooh stage.

Ellie will now sit on the second or third time I tell her.  She has been walking with us every morning and afternoon.  She loves to walk.  She does not tire out though.  I thought when I got her back after a brisk 30 minute walk that she would be pooped.  Ha!  She has another gear!  Charlie and Ellie get along great and begin each morning playing.  Ellie has met Roxie.  Roxie gives her the business all the time, and Ellie runs to Charlie’s side.  Then Ellie goes back in for more.  She also has met a Pug that we walk with often, along with a basset hound.  We have quite a morning walking group!  She gets along with every dog she has met.