Toby, age almost 11, came into foster care because the grandchildren came to live in his home.  The children are toddlers and things that toddlers do and it just wasn’t going to work out.  Toby has been a nice dog with humans although a bit headstrong.  He has not done well with other dogs.  We have been working on behavior issues with Toby and he is progressing well. He has had some medical issues which we are also taking care of.  Toby had an adrenyl tumor removed and is recovering as of 3/7/18.  He has repeated skin issues which are rather severe.  Toby has had so many medical issues.  We no sooner get one thing cleared than another pops up.  We are sad to say we had to let Toby go to the bridge. 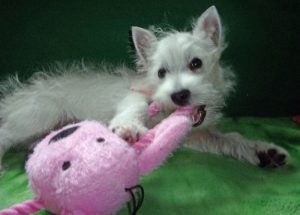 Stevie (now Wynter Starr) arrived in foster care after several stops.  She was sold to a family with 4 children under the age of ten and some Poms.  They decided she didn’t fit into their family well and they advertised her for sale.  A couple who had recently lost their 15 year old saw the ad and bought her.  They knew they weren’t ready for another dog so turned her over to Rescue.  Stevie is almost six months old and is now spayed and adopted.

Sassy is 4 years old.  She was surrendered because she didn’t get along with the other dogs in the home.  She was very protective of Mom and would snap at anyone who tried to hug her.  It reached a point where they decided she had to find a new home that would suit her better.  Sassy is slowly learning to accept other dogs but it IS a learning process.  Sassy has found her new home where she will be an “only” child.

Lilly is 5 years old.  Her mom passed away and she, along with 2 other westies, were turned in to a shelter.  They all found homes but Lilly was returned.  The shelter then contacted us and let us take her.  Lilly was returned because they couldn’t housebreak her.  The shelter did xrays to eliminate bladder stones as the issue but they put her on antibiotics because there was blood in her urine.  We hope that she will quickly recover and regain housetraining control. (So far, so good….with lots of trips outside, she hasn’t had any accidents so far.)  Lilly is unusually timid and has very little ‘normal house dog’ experience. For instance, she is just learning to do steps and is rather afraid of doors.  But she loves other dogs.  Fortunately she is in a foster home with other dogs and we hope this will help her regain her Westie spirit.

Lilly has been adopted by a family with another Westie.  She is doing very well.

Ellie is 5 years old.  She was a puppy with us originally.  She had a birth defect called an ectopic ureter.  The tubes weren’t connected properly so she leaked urine continually.  This required surgery which we did.  She was adopted and had a happy family.  But recently both of her parents passed away and she is in need of a new family.  Ellie is healthy but will always have some issues related to the original problem.  She is on Proin to control any residual leaking.  (We are still trying to get this under control since there was a period where she wasn’t getting her meds. )  She has a tendancy towards urinary infections due to this condition.  She has a history of some fall allergies which are treated with antibiotics.   Other than that, she is a healthy, happy little girl.  She is living easily in a home with two other dogs.  She quickly learned to use the doggie door and sleeps quietly all night long.   (Placement will be made from the waiting list….applications can be found on this site.  Note:  Applications must indicate that they will consider a dog with “more than normal medical” issues.  She will always be on meds for “leaking” and is likely to have more frequent than usual urinary tract infections.)   5/2018  Ellie has now been adopted.

Leo, age 9, was a stud dog. The breeder advertised him on Craig’s List and he was adopted by a couple who wanted to make sure he wasn’t put down. They really liked him but they were unable to housebreak him. When they finally gave up, they surrendered him to us. Leo is now in a foster home with another male Westie and they have quickly become best friends. Leo is a “cuddly” little feller and very lovable. His foster home is working with him on his housebreaking issues. They will complete his medical, work on house training, get him groomed and hopefully he will be an easily adoptable little boy.   5/2018  Leo has now been adopted.

Hope came to us at 6 months of age. She had been a “failure to thrive” puppy and was very small for her age. She wasn’t developing normally and so was surrendered to us. We did extensive work with vets including an MRI, spinal tap, etc. The diagnosis was that she had likely been deprived of oxygen at some point and that caused brain damage. Hope is now fostering in a home that plans to adopt her after she is spayed. At this time she is learning to be as normal a dog as she can be. Her pupils are pinpoints which likely impacts her sight. She can hear but doesn’t seem to connect to sounds in a certain range which includes human voices. She licks like a cat but doesn’t pick up food on her own so she has to be hand fed or fully supervised to get food and water. Over time with lots of attention, she has improved in many ways and we hope that this improvement will continue. Because she is so small, we expect it will be some time before we will spay her but when that happens, she will already be living in her forever home.

Samson (Sammie) came to us from the Detroit Animal Control and Care Center. He was turned in by his owner to be euthanized. She said is was 9 years old, blind, deaf and had a weak backend. The DACC didn’t feel he was as bad as the owner claimed and were happy to have us take him into care. Sammie is a very sweet, very mild mannered little boy. He IS blind…vet says he was born with undeveloped retinas. He doesn’t see even shadows. But he can hear. He is responding to voice and after several days, he started looking when his name was called. We believe he never experienced interaction with humans.  No one had talked to him and he hadn’t learned to listen to voices.  He is responding very well now.  His back end is very weak but it is growing stronger by the day. He is getting physical therapy to strenthen and it is working well.  We suspect he was crated for long periods of time and his muscles grew weak or never developed normally. Sammie may be 9 years old but he also may be 6 years old. There is no way to really know. We expect Samson will soon find his Delilah (or Del) and be a great addition to a lucky family.

Abby, age 8, came to live with her new family when her mom got sick and passed.  Abby’s new family didn’t really have time for her; the wife was ill and couldn’t handle the two dogs.  They kept one and surrendered Abby.

Abby arrived with several issues, from the excessive water drinking and urination to her over reaction to other dogs. We thought we had things resolved and started to look for an adopter, but then things started to go back to the original state to the point where she was again having many accidents. As this evolved, so did her temperament devolve. We were concerned that even as an “only” dog, she would come into contact with other dogs at the vet, on the street, the fence in the yard, etc. and react poorly. Her last scuffle ended in a serious bite which required medical treatment and a bite report to the county. We have a responsibility to not adopt out a dog that has bitten. Abby is at peace now.

Zac is 13 years old.  He was surrendered by his third owner.  She had recently lost her husband and has had several surgeries herself.  She just could not afford take care of him.  (She had been skipping meals to feed him!)  When we got him, it was clear that he had some issues with his back leg.  We got him to the vet quickly and found that he has arthritis in that leg.  Now on pain meds, he is doing much better.  His toenails had curled under so a good clipping has him walking on the pads of his feet again.  He is fitting in well with the foster family.
OCTOBER 2018  ZAC HAS BEEN ADOPTED! 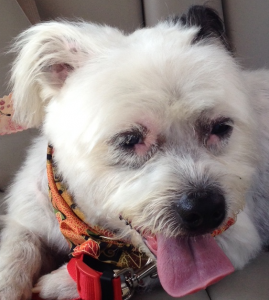 Buddy came into foster care at age 8.  His owner thought he was a Westie/Shih Tzu mix.  We think there is more in there than that and aren’t really even sure about the Westie/Shih Tzu.  He is larger, maybe 30-35#, long in the body.  His ears look like they stand but the hair looks like they are hanging.  His tail sometimes goes up like a Westie but it is longer than a Westie tail.  He has a black ear and a black ring around his tail.  The lady who surrendered wasn’t the first owner.  She said prior owner had been beating him with a broom handle.  We are amazed at his friendly demeanor considering that treatment.  He looks like he has skin issues but are pretty sure that it is a reaction to a boatload of fleas.  He will be seeing the vet soon and needs to be neutered.  We have a friendly dog here who will make some family happy even though he isn’t going to be mistaken for a Westie by many!   BUDDY HAS BEEN ADOPTED! 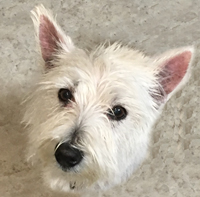 Libby, age 9, came into foster care after her family was divorced and dad could not afford her care any longer.  Libby is a very nicely tempered girl.  She is currently being treated for skin issues.  She has just arrived and hasn’t been groomed yet but we can see a pretty little girl in there!  Libby seems to be very comfortable with her foster sibling and has been very good for baths and ear cleaning by her foster mom.  She is currently being treated for skin issues and severely infected ears.  We hope she will soon be ready for her new home.   LIBBY HAS BEEN ADOPTED.