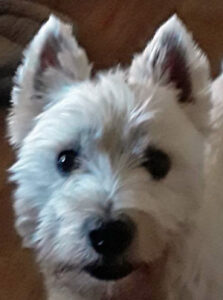 Whelan, 5 years old, came into rescue due to behavior issues that may be due to owners’ time constraints. He is being evaluated in foster care but otherwise appears to be a healthy normal boy. After his vet appointment we will have a more confident feeling about him physically. His foster parents are exposing him to potential triggers and evaluating his understanding of basic commands. He is a happy playful boy!   1/16/22:  Whelan has been adopted! 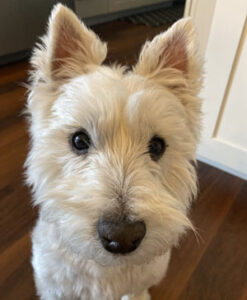 Pierre is a 9-year-old male who came into Rescue because he has developed diabetes.  His family was unable to provide the care he needs.  We are currently working with our vet to make sure his medical situation is under control.  He is living with another Westie male and doing well.  Pierre requires two insulin injections daily and they must be given on schedule.  This means he will need a home where they are able to maintain a consistent schedule. Pierre has been adopted!! 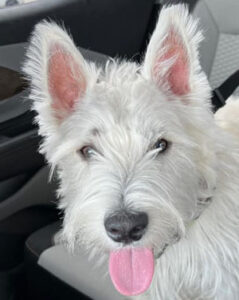 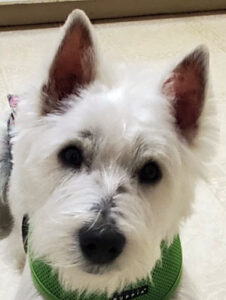 Cully (nee Comet) was just under a year old when he came to Westie Rescue Michigan.  His owner got divorced and moved to an upper floor apartment.  He was not housebroken which created issues; and his behavior is also something we will be working on.  He needs to see the vet, be neutered and allowed to settle in and learn to live politely in a family home.  This could take a while to work out.  When the time comes for adoption, we will place him from our extensive waiting list of approved applications.
Note:  He was very matted when he came in, never having been groomed, but he looks great post spa day.  He is much more comfortable without all those tangles and snarls pulling on him. Cully has been adopted!! 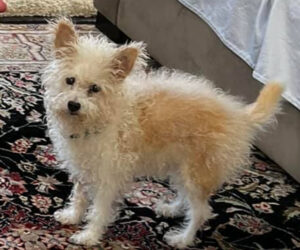 Sandy (est. age 10 years) on his way home (foster home) from the shelter.  Sandy is a sweet little guy.  He has seen the vet and needs a dental, but he needs to gain some weight and get over a case of kennel cough first.  So far, he appears to be a little one who just wants to be loved.  Time will tell if his hearing is diminished or if he is just biding time until he gets used to his new location.  He does seem to be much more comfortable in a home than he was in the shelter.  Sandy has been adopted!! 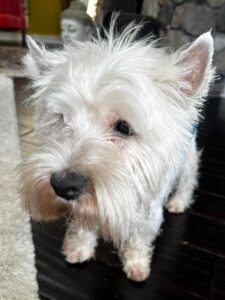 Patsy and her brother, Charlie, are littermates and were surrendered to rescue after both owners passed in the last year. The family was unable to keep them and decided to contact Westie Rescue for help in placing them in loving homes.

Patsy is a beautiful 10 to 11-year-old Westie girl and arrived in rescue with some serious health issues that we were able to get treated immediately.  She had a severe UTI infection that had spread internally which was resolved when she had an emergency spay (we love the vets we work with!) and a severe ear infection that’s being treated.  Patsy is recovering quickly from her surgery and currently awaiting a dental.  She’s now up to date (or soon will be) on vaccinations, although she might lose a few teeth during the dental.

Patsy has acclimated to her foster home quickly and gets along well with the resident Westie.  She is making progress with house training as well.  Patsy has been adopted. 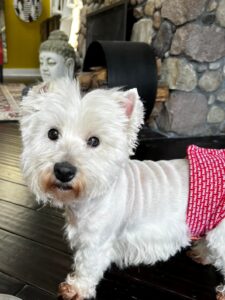 Charlie and his sister, Patsy, are littermates and were surrendered to rescue after both owners passed in the last year.  The family was unable to keep them and decided to contact Westie Rescue for help in placing them in loving homes.

Charlie is a handsome dude at 10-11 years old and a bit smaller than many of the males we see in Rescue.  He arrived with a serious ear infection that is being treated and is getting up to date on vaccinations.  He is scheduled for neuter surgery and a dental, and lost a few teeth. He’s had a bit of a tummy upset (not that unusual for dogs experiencing big changes) and is feeling much better now.  He seems to rely on Patsy for leadership but was just great while she was away during her surgery.

Charlie has adapted well in his foster home and is making great progress on housetraining.  He seems to like other dogs and the attention of his foster mom but is not a fan of having his picture taken!!  Patsy has been adopted!! 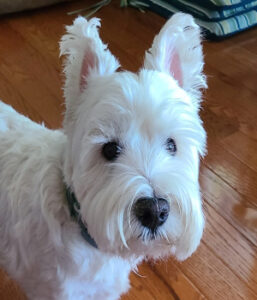 Murphy is a 9-year-old male who came to Westie Rescue when his owner recently passed.  He’s getting along great with the other Westies in his foster home and enjoys walks and “Westie Tag” with the rest of the gang. He’ll be visiting the vet and the groomer soon and we’ll be trying to get him down a few pounds with only doggie food.  We’re also going to take time to evaluate his allergies (you know how Westies are with allergies!) and see if a change in diet helps some.  While technically a “senior”, he’s got lots of zip and love to give to his new owners– he seems to particularly enjoy snuggling with his foster mom.  10/20/2022:  Murphy has been adopted!!  Congrats to everyone!