This is a memorial for a little Westie Rescue named Bridget.  Originally she was adopted by my father, Ed Wieczorek in approximately 2012.  Her foster mother, Martha, moved to Ireland shortly after Bridget went to my father.  When my father died in 2013, Bridget was adopted by my father’s caregiver, Margaret Graff and her husband David.  They provided Bridget a wonderful home where she was cared for well and loved even more.  She visited with us often and was still very much a part of our family too.  Bridget (Sweet Pea) brought us much happiness and joy but unfortunately she took ill and had to be euthanized on January 2, 2019.

Jake came into Rescue at age 13 weeks. I was painting my living room when I got a call from a lady who wanted to surrender this little one. She had purchased him for her boyfriend but the boyfriend really wanted a husky. She told me Jake had been sick from the time she got him with kennel cough. I dropped everything and went to get him. Jake was the tiniest little thing…weighing under 5 pounds and with every rib showing. Within two weeks we almost lost him to pneumonia. He spent his first months in the hospital and at home being treated for this but he fought through it all and survived. After six months of struggling to keep him alive, he was a member of our family. He had issues all of his life, likely related to his difficult puppy struggles. But he was a loving dog who did everything he could to be “good”. He was just that dog who was always in mischief and in trouble for one thing or another. When he was 13, he became ill with cancer. The above photo was just a couple of weeks before he passed. He had just earned another Scent work leg. He earned titles in Agility, obedience, rally, earthdog, scentwork, lure coursing ability, barn hunt, and trick dog. He overcame many pain issues (through acupuncture and chiropractic care and his own strong spirit) to do all of these things happily.

Jake was put on earth to teach me lessons and I learned a lot from him. Now I hope he is in heaven with his brother and sister, just enjoying his new life without pain or fear. God Speed you, Jake. We miss you very much.

JACKSON lived for his hour-long morning walks in Midland City Forest.   His other favorite spot was a small hill near a creek in our backyard where he showed all of us how to be attentive to nature.
JACKSON’S passing was sudden. All he knew in this life was Love.
Godspeed, JACKSON GABRIEL BUTCHER. 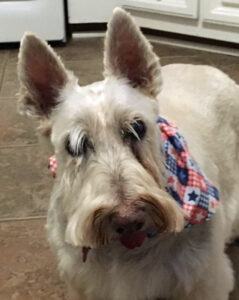 Mandy had been in Westie Rescue since October 2015.  She became a permanent foster in spring of 2016.  Because of her health issues,  she had surely been neglected most of her life.  She lost all of her teeth but three and she had a huge bladder stone and absolutely horrible allergies.  But in our care she actually thrived and became a happy bouncy girl.   She still required her weekly medicated bath and we watched her skin and ears closely .  We stayed on top of it, not just because it was our job as a foster home, but also because she became a part of our family.   Mandy was a true Scotty by nature very proud and VERY bossy and VERY loving . She eventually developed kidney disease in March of 2019.  In October 2019 she went into congestive heart failure and we had to let her go to the bridge . I am so thankful she found her way to us . We loved her and she loved her family.   I am so thankful to Westie Rescue for standing by this girl all the way to the end.

From Foster Mom and Dad