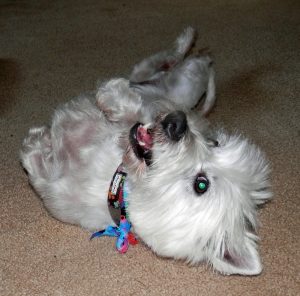 Jamie Frasier came to Westie Rescue as a stray.  The shelter let us have him because he was heartworm positive and had flea allergies which affected his coat.  Little Jamie Frasier was  the nicest little boys from the very start.  Once he was cleaned up and had some time to settle in, he became a little charmer.  Jamie was adopted and had a year or more of love and care before he became sick with an unrelated illness.  We are all so sad to have lost Jamie and are just grateful that he knew love before he passed.

Donations in Memory of Jamie Frasier

Timmy has enjoyed his new life as a Canadian, hence the name, “Timmy” relating to the Tim Horton donut franchise after the famous Canadian hockey player who starred with the Buffalo Bills hockey team. Perfectly suited to join his greyhound buddy, Sasha, the two of them were good company for each other . When we met “Corky” (we changed his name), he was watching carefully from a bench, hardly noticed him, he was so quiet, while his 3 Westie sister & brothers, bounced around Sasha and through her long legs. After awhile Timmy guessed we were ok but we held our breathe when we left in the car with Timmy and Sasha, Tim perhaps thinking this was a “play date.” Barb had worked hard with Timmy for some months so when we left Barb and family, she tearfully called our, “remember, good boy potty.”

That delightful Timmy further integrated himself into living as an only child after his companion Sasha died but rather enjoyed being the total “apple of our eyes.” He charmed our friends’ too, Timmy accompanied us most everywhere. Tim met and was photographed with Santa who arrived on a tugboat in the canal, as well captivated a Coastguard lady on the “Griffon” icebreaker moored alongside the canal for a few days. Did he know he was special? Yeah.  Passers-by admired Tim who spent every day in the window searching for squirrels. He was fond of his jaunts along the canal promenade where some were treated to Timmy if he wanted to dance his charming Westie swagger.  Gentle children … he could melt their hearts. A super-strong guy for his size, his intended direction was to pull left or right on his leash …  so many interesting smells, gotta do a little leg lift here and there.

When Timmy became so ill in his last 2 years with a rare blood disease where he lost all his red blood cells we were very fearful, he lost a frightful amount of blood. Tim’s incredible champion of spirit and his strong will to come back to us along with formidable veterinarian care delicately balanced new and continued health problems. His diabetes and respiratory problems thwarted our spirits and his, but we worked hard to keep him happy, so he was. With cyclosporine, his immune system became compromised, it had to be so Timmy’s body wouldn’t fight the meds to keep him on stride, so there were infection issues. Then early sight loss seemed defeating to Timmy.  With our encouragement Timmy began to meet new interesting challenges, and we we marvelled at the perseverance that smart little dog presented to us. “That’s our Timmy” we would chuckle at him. During those last 2 weeks Timmy slowed down considerably, we visited the vet clinic again looking for the “magic pill” that would again set Timmy into recovery, but that wasn’t to be. The phenomenal life that Timmy led, even happy to have us lean on him during some of our own serious health struggles helped us greatly. His precious spirit could live no more in his formerly expressive little body. Timmy left our lives in tearfulness and love with dignity, pressed against our hearts, we like to hope, in a meadow of lavender and butterflies and Sasha where that wee spirit awaits us. “We always love you, Timmy.” Gosh, what serendipity to find our boy …. how could we have earned God’s blessing of our little Timmy had it not been for the Michigan Westie group and others like Beth who would oversee him. Especially, we thank dear Barb who had the inkling that he needed to be with us. Thank you for everything.       Much love, Sharon & Jack

Donation in his memory: